Empower Yourself By Shaking Off The Limiting Ideas Of Other People! 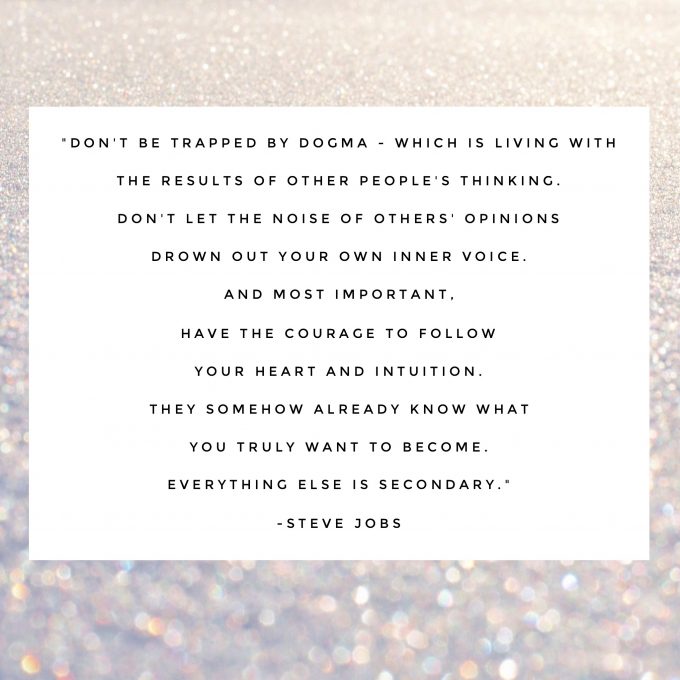 Thinking for yourself and owning your truth is not always easy to do (at least for me it isn’t!) in a world full of pervasive ideas, comparisons, pressures and speed.

Not to mention, the perceived competition and the lives that are airbrushed for us on Instagram showing only a highlight reel that we are meant to absorb as a reality.

I know, we are all bigger than that. But… are we?

I’m not. I’ve fallen prey to other people’s projections upon me when I’ve lacked confidence.

I realized the hard way that if we stop thinking for ourselves, creating for ourselves and living for our dreams and decide to turn things over to the masses, the “acceptable” paths, what your parents or partner or friends want you to be… it’s not going to work out well.   When you take on the beliefs of healers or psychics that are not your own but seem to have things figured out… when you step into a reality that compromises your own… that’s when things can get very messy.

I hear this happening to people all the time, and I’ve lived this even recently in ways that have been very destructive to my forward motion.

Somehow, in some way, someone or some idea or some event casts doubt upon or overshadows your own voice.

Slowly or quickly, you stop living your own truth and take on the characteristics of another, of a group or even a whole life philosophy.

When you do this, even in subtle ways, you may find that your personal magic is depleted and life falls flat. The happy affirmations and visualization and manifestation practices don’t work well, things become harder and hard work is all you can do because you’re trying to make something happen that you aren’t really passionate about, things don’t fall into place often, and when they do, it’s not fulfilling, plus, life feels like it’s never enough… and…

If you’ve been feeling like your genius has been clouded by other people’s opinions, projections or desires… if you feel like you’ve given your power over to these ideas, people or groups… taking back your independent thinking will be your rocket-ride forward!

Being entirely honest with oneself is a good exercise ­– Sigmund Freud

Psychological projection is known as a way for people to manipulate you in order to deal with uncomfortable feelings in their own lives. It’s not always conscious, and therefore it’s not clear if it’s done intentionally or just as a force of habit.  It’s a defense mechanism at times, or a way for someone to cope with their difficulties.

Plus… people can project blame upon you even if you are innocent, confirming for themselves that that they are correct even if they know they are wrong. This blame shifting is also a way to for the guilty to hide their own mis-doings.

It’s also a slippery slope to have these blame shifters around.

Psychological research has found that there is something that exists within our human mind/spirit called confirmation bias. This notion of confirmation bias is that we seek out information to be in line with our current belief system, even if it isn’t true.

Sometimes that energy is being projected upon you.

People will attend to information that is in alignment with their comfortable, current belief system, and disregard information, to the point of deeming it inaccurate and wrong, in order to feel comfortable maintaining their own beliefs. (you can read more on this HERE)

Sigmund Freud coined the term “projection” and his classic example of projection is when someone is cheating on their significant other and then accuses the other person of the same type of behavior. This notion of Projection pre-dates the Confirmation Bias, and it is one of the psychological foundations upon which this Confirmation Bias hypothesis was explored.

So, if you’re starting to believe what you’re told is impossible, or you are starting to pick up the attitudes and doubts around you, or you’re feeling shaky and swayed by the pressures around you, you’ll likely see more data everywhere you turn to support these beliefs as they get your attention.  All this energy will help bring these “projected truths” to life.

We tend to call this a self-fulfilling prophesy.

If you give your power over to these projections and expectations put upon you from others, you become the effect of them.

As reported in, Psychology Today,” A bulk of research shows that when people are put in situations where they are expected to fail, their performance does plummet.”

A study conducted to test the difference in the ability of males versus females in a 3 dimensional rotational act was conducted, “Effects of gender beliefs in mental rotation”. There is a long held stereotype that males are more adept to doing better on mathematical and spatial tests. In this study, comprised of 107 females and 90 males, students were divided into 3 groups –

The findings concluded that when being told your gender would do worse on the test, you would be more likely to perform in line with the suggested stereotype. Essentially, it’s not too hard to fall in line with these projections and biases and expectations tossed upon us.

Similar situations: you’re told by parents or bosses that you should focus on jobs more “suitable” for you rather than what you want… you’re reminded by loved ones how you always ruin your relationships (even though you never thought that before… but suddenly you start to see it happen…)… you’ve put faith in the path laid out for you by an intuitive, a healer, a spiritual teacher because you were told it was the more right thing to do, instead of the path you want for yourself. Or, you do the same thing when picking partners, making decisions… putting your faith in everyone but yourself.

Suddenly, you’re not good at anything… and you’re not sure why or how it happened. And it continues to happen until you decide:

“I am taking my power back.”

Eat Well: Take pride in the food you eat and your diet. Nourish yourself. The healthier you become, the more love you will have for your self and your life. Making the mere choice to eat healthy is a huge step, because you are choosing to take care of yourself first. Eating foods rich in Omega-3 can raise your serotonin levels (the neurotransmitter responsible for happiness) . Foods rich in Omega – 3 include fish, nuts, and flax seeds. Also, fruits such as cherries, oranges, kiwis and pineapples are known to raise serotonin levels.

Sleep well.  Sleeplesness can wreak havoc on your self esteem and drag down your energy overall.  HERE are some feng shui tips for sounder sleep if you need to get more restorative rest.

Beautify your home.  Your home reflects who you are and therefore your individuality. It is your mirror. Surround yourself with beautiful things all day that reflect YOU. This is a good time to strip all kinds of “decorations” from your home that other people told you that you needed. You need nothing but what feels good to you!

Affirm your talent. Every day. All day. Remind yourself of your talents, your chosen path and all of the qualities that make you amazing!

Keep on moving. The less you let yourself get stuck or swayed by others, and keep moving forward on your path, the more you’ll start fulfilling your own positive prophesies for yourself!!!

Thank you to my sister Nicole Claudat for breaking down for me the psychology behind the ways we give our power away… and creating an even more compelling path to move forward without this drain on our lives and our dreams.

This independent thinking is giant steps down the road of your own fortune-building!!!

Eight weeks of fortune- building Feng Shui to get your money in order & your wealth growing starts soon.

And… the FREE intro video series to break down three of the big blocks to money in your space & your life kicks things off.

HERE’s where to go to get started! (xoxo!)