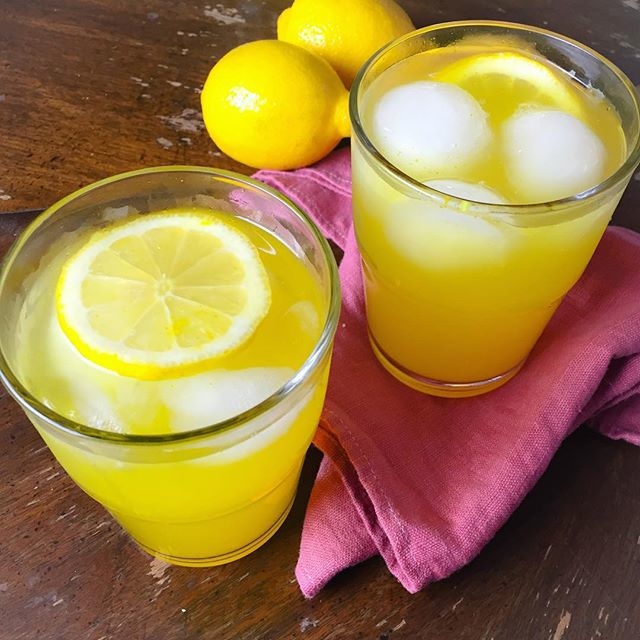 This Turmeric Lemonade is wildly happy-making in my life.

It was after I shared and watched the comments and notes fly in — people who alleviated years of depression, people who traded psych meds for curcumin pills with joy- that I knew there was more than a cool study happening.

I love creamy coconut Turmeric Tea to dose up on turmeric, but a much more convenient, and purifying, lemonade is everyday bliss. You’ll be looking forward to every batch!

Turmeric is potent and amazing.

Before I get started with the lemonade my sister whipped up (Nicole was a master mixologist pro at one point, and her mixology is stupendous so rest-assured this tastes awesome!) , I should say that turmeric was on my “not-before-surgery” list of things to stop taking as it is a blood thinner. It also interacts with some prescription drugs, so you’ll want to check with a doctor before eating or drinking- especially lots of it!

First take three cup of water and boil in a stainless steel pot. Once the water comes to a rolling boil add the peeled turmeric and let it boil for 8 to 10 minutes.

Next strain the turmeric water through a mesh strainer in to a glass carafe.

Add the honey and stir to incorporate

Adjust the flavor to your liking… and drink up!

Here are some of the benefits of turmeric, for those of you who aren’t yet aware of it’s powers:

The active ingredient in turmeric is known as curcumin. It has a powerful anti-inflammatory effect and is shown to be very effective as an antioxidant.

According to James A. Duke, Phd., in the October, 2007 issue of Alternative & Complementary Therapies, and summarized in the July, 2008, issue of the American Botanical Council publication HerbClip . After he reviewed over 700 studies, he found that turmeric can be more effective than many pharmaceuticals when treating severe and debilitating diseases. The most important part of his research notes that they can treat these disease, “with virtually no adverse side effects.”

He found that turmeric was specifically helpful with:

Arthritis – Turmeric has anti-infammatory properties and have been proven to alleviate arthritic symptoms.

Since depression is associated with oxidative stress and damage, the antioxidant properties of curcumin help repair neurodegenerative damage it acts against oxidative and inflammatory responses generated during depression.

HERE I learned that turmeric also helps regulate and normalize the level of neurotransmitters in brain.

More Advanced Studies on Turmeric and its Health Benefits:

This is a study that turmeric is effective for depression, although should not be used as a front line treatment.

Relives allergies –   Since honey is an anti-inflammatory it has be known to soothe allergy symptoms caused by inflammation, such as coughing. It also contains pollen which can act as a natural antibody to the causes of seasonal allergies. (you can learn more HERE)

Cough suppressant – Honey coats the throat aiding in the relief of a cough and is also known to contain dextromethorphan, a natural cough suppressant. (HERE is more)

Sleep Aid- Honey is known to release insulin which increases seratonin. Seratonin is then converted to melatonin which is a natural sleep-aid. (HERE is more)

This is an advanced study for honey benefits.

Increases iron absorption – Fruits rich in Vitamin C allow our body to absorb Iron. It is high recommended to squeeze lemon on spinach, meat, and other foods rich in iron.

Lowers risk of stroke- According to the American Medical Association, eating citrus fruit high in vitamin C can lower the risk of strokes in women. (This from Medical News Today)

THIS is an advanced study for lemons.

All that good stuff from lemonade! Yay!!!