The Power Of Texture & Touch Can Light Up Your Home & Life! 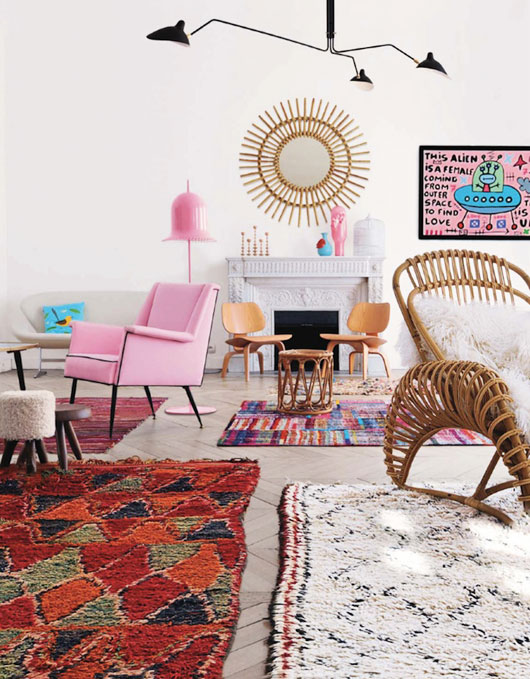 Touch is a lot of the lusciousness of life.

And, touch is the sense I see lacking the most in homes and especially in offices.

There’s no texture. No sensory richness. Everything is designed so that you do not touch it, or that you touch it minimally and in an impersonal manner.

Touch is something personal. It’s how we connect to space and connect to each other.

To be present, you need the sense of touch intact. Without touch,  you’re stuck in your head.

Without touch, we float in space, ineffectual and lost and struggling and sad.

Today, hug someone, hold animals, play with babies, lay on some soft grass or feel the leaves of a plant… stroke velvet… Today lets revel in the sense of touch and use it to make life so much more alive.

“The tactile system is the earliest sensory system to become functional (in the embryo) and may be the last to fade” – James L. Fosshage, PhD

We have been conditioned for decades to believe that touching is wrong. As kids you are taught to not touch anything in the store, we are taught not to touch strangers, we were told don’t touch anyone who is sick… Lots of fear about touching…

But, for all these don’ts, researchers have found that reaching out and touching someone can have profoundly positive effects on your health and mental well-being.

Sadly, we’re moving a away from a tactile experience of life. Virtual Reality is devoid of the sensation of touch, and it’s a growing phenomenon. Our computers and TV’s and monitors lack the touch sensation. We text more than ever. We’re connected virtually. What about… physically?

Touch is a human need.

Research on the magic of touch began in 1958 with the highly esteemed Harry Harlow at the University of Wisconsin-Madison. In his experiment, Harlow removed newly born rhesus monkeys from their mother 6 to 12 hours after birth. He then placed a fake, or “surrogate” mother in their cage. Some of the surrogate mothers were made of wire, while others were built of wood and covered in soft terry cloth. In both scenarios, some surrogates had a nipple for feeding and some did not. Harlow’s results found that the monkey’s preferred the soft terry cloth surrogate mother, even when the bottle was attached to the wire surrogate mother. Developmentally, the surrogate raised monkeys were more aggressive later on in life, and when they became mothers, were abusive, indifferent and distant towards their young. Some abused their young so badly they died. (*you can read more about this HERE)

Research has now extended to the power of touch in humans. In one study, babies who were going to receive a blood test were either swaddled in a blanket or held skin on skin with their mother. Results showed that the babies that were held skin to skin had, lower heart rates and cried 82% less.   Studies have also shown that regular touch can decrease anxiety, lower your blood pressure, increase your white blood cells, and increase the production of endorphins (neurotransmitter involved in happiness).

After reviewing many studies, psychologists from the University of Milan-Biococca, Alberto Gallace and Charles Spence, found that; elderly nursing home residents often feel unwanted or unloved through loss of physical contact, people are more likely to receive a cigarette when touching them at the time of the request, bus drivers are more inclined to give a passenger a free ride if they were touched upon asking, and people who are touched are more likely to agree to a survey at the mall. In 2010, Gallace and Spence also reported that woman who are more hugged and touched by their partners have significantly lower blood pressure than woman who are not hugged very often.   Neuroscientist, Michele Noonan, PhD has also found that it is important to touch someone when you are apologizing to them because it builds a connection. She explains in Huffington Post: “The sensation triggers the brain region called insula, which is involved in emotional processing, and can help ease a person’s irritation in the moment.”

Can we communicate through touch alone?

In 2009, Matthew Hertenstein of the University of DePauw showed that you can. He had volunteers convey the emotions of: anger, fear, gratitude, love, sympathy, happiness and disgust through a touch to blind-folded subjects. The results…They got the answer correct 78% of the time. You can read more about this HERE.

We judge others based on textures and touch. The cold stone lobby of a “power” office reflects the sentiments of its inhabitants. The fuzzy sweater your favorite teacher made him or her more approachable. A soft sofa makes you want to settle in and hard blinds on windows create a sense of strictness or precision… or disconnection.

Look at the textures around you. Do you feel like touching them?

Now, look at the personal touch in your life. Do you touch people, animals… do you seek out touch… and does touch feel welcome to you?

Feed your life with more of this connection and you’ll find yourself more linked into life, happier, more calm and far more of a positive force. In every way, touch brings life to life.

P.S.: The Catalyst Camp Feng Shui Home & Life De-Cluttering is on the way  soon to open up your life to the new like never before!

You can sign up HERE to start the FREE video series & revolutionize your clutter clearing the moment this BRAND NEW video series arrives in November!

Join us making space for more money, love, peace and happiness to flow now and in the New Year!!!

As a thank you for helping me make this guide (many of you have helped in important ways), and as a celebration of it’s arrival (!!!) the e-guide is ON SALE for just one week… so now’s a great time to get started.