Conquering The Fear Of Missing Out 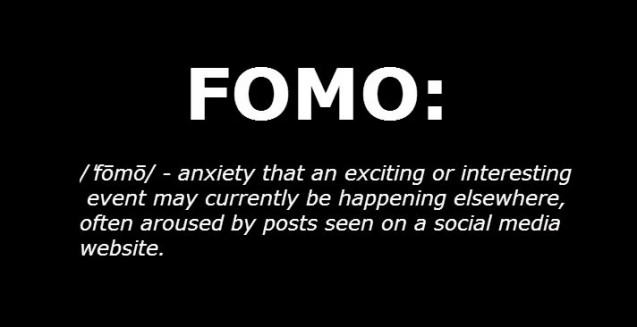 Do you look online and wish you were somewhere else, doing something else?  Do you feel regret at the choices you made when you see people having so much fun on Instagram doing the things you decided not to do? Do you wonder why your own life isn’t as awesome as the lifestyle gurus and celebrities and other friends you have who seem to have it all?

These feelings are associated with the 21st century version of the phrase, “the grass is always greener on the other side.” Its acronym is FOMO, which stands for Fear Of Missing Out. FOMO is a feeling of fear that others are having incredibly fun, amazing, experiences and successes that you are not having.

Are you afraid you’re missing out on something?

I’ve been plagued by this at different points in my life, but never until the advent of social media did I feel suchhhh a FOMO pull that it caused me, as I saw it’s negative effects,  to  snap out of the haze and get very grounded in my own decisions, very much more full of purpose.  In fact, I didn’t realize FOMO was such a big thing until I saw the crazy negative and at times disastrous effects it has… and so… today… conquering FOMO is a very big deal!

FOMO can move you to make choices you wouldn’t normally make, out of fear that you will be missing out on something important.  Taking the trip on a credit card or partying yourself into deep debt so you can be seen everywhere,  getting into relationships because they look right on the surface, choosing jobs that are glamorous rather than fulfilling, compromising your core values to be a part of the popular crowd that seems to have it all … and on… and on…

Toss social media into the mix, where you have a chance to see what everyone is supposedly thinking, doing and adventuring and achieving and you’ve got a real slippery slope.   It’s never been shocking to me that people get depressed looking at Facebook and Instagram… or obsessed with it… because there’s a whole big world online that doubles the pressures of FOMO.

Could this ease of accessibility into the realm of other people’s lives be too much information? Some suggest it is! Kevin Systrom, the chief executive of Instagram believes that, “We aren’t used to seeing the world as it happens…We as humans can only process so much data.”  (more on this HERE)

Sherry Turckle, a professor at the Massachusetts Institute of Technology believes, “We are struggling with the always-on feeling of connection that the Internet can provide, she said, and we still need to figure out how to limit its influence on our lives.”

Andy Przybylski and colleagues conducted a study on FOMO and is consequences. They found that those people with a high rate of FOMO had lower scores of life satisfaction and positive mood. They also found significant data showing that those subjects that use social media immediately before bed, as soon as they wake, during meals and while in class, showed higher levels of FOMO.

An article in The Washington Post exemplifies how FOMO is causing students to feel extraordinary pressure to excel, even at the detriment of their health. Wilma Bowers, President of the Parent-Teachers Association in McLean Virginia states, “ We know of students who beg their parents to go on Ritalin because everybody else does it to get better grades.”

And considering the fast paced, technology fueled information age, competition and pressure to achieve success are having detrimental effects to the mental and physical health of students. A Virginia Fairfax County Youth Survey found that, one-third of seniors reported being so depressed for over two weeks that it affected their performance in school, only ten percent sleep for eight hours, and one in ten students take prescription drugs that are not their own.

If you are struggling with the idea that you might be missing out you can try :

You are missing out on absolutely nothing if you are living every single minute as present and excited and full of purpose as possible!