One Idea To Deepen The Love In Your Life Right Now! 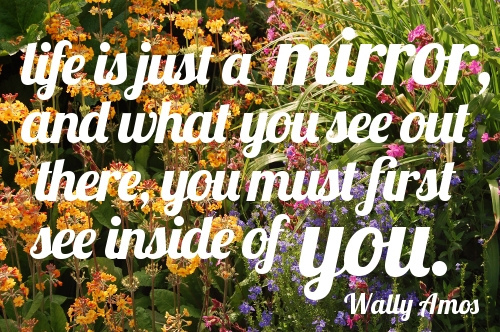 There are so many ways that we are living a seeming holographic projection of what we believe and who we are on the deepest levels.  Sometimes that hologram is created in tandem with others: at work, family, friends, love… all full of this synergy.

The mirror effect and the power of influence makes an incredibly profound case for surrounding yourself with people who reflect back awesomeness to you, people you love, admire and feel aligned with.  It also makes a great case for connecting more deeply with the love in your life by opening up to becoming a more powerful mirror yourself!

Today, let’s deepen the love all around us in life by looking into the mirror effect!

We actually, subconsciously, mimic people around us.  This quote cited in Psychology Today makes this clear:

“Firstly, mimicry and mirroring, like much of nonverbal communication often occurs subconsciously. This is holds true for the person doing the mimicking as well as the person on the receiving end. Since it is occurring on this level, people often are not able to articulate that the other person’s mimicry is what creates the positivity and liking (Chartrand & Bargh, 1999).”

The Chameleon Effect shows that we pick up, somewhat automatically, behavioral aspects of the people we spend time with:

John Bargh and Tanya Chartrand, both psychology professors and researchers at New York University, coined the term “the chameleon effect”. This is the belief that there is an innate inclination for people in social interactions to imitate the behavior of each other…examples of this include speech inflections, hand gestures, facial expressions….all unconsciously intended to build a connection with the each other in the social interaction at hand.

As cited in Explorable: “You can notice that people who get along well behave almost the same way, as they unintentionally mimic each other’s body posture, hand gestures, speaking accents, and other. The body is actually autonomously making the interaction smoother and increasing the level of likability when in rapport.”

When I first learned about this, I thought about the most open hearted people I know, willing to deeply connect with others to the point where they unconsciously adjust in order to mirror them more, and, in the process, find themselves more mirrored as well.

But as you’ll see below, openness is a key aspect here.  If you are closed to possibilities you may have a harder time finding people who are your mirror and you’ll possibly be less likely to be a mirror, too..!!!

So, if you’ve been somewhat discouraged lately by a lack of deep connection, it may just mean that it’s time to open up your hear and your mind!

Here is some fascinating science:

In an effort to validate their queries as to what makes people imitate each other, Chartrand and Bargh set up 3 experiments to test if mimicking behavior is automatic, if knowing someone or not knowing someone has any bearing on the probability of mimicking behavior to occur, and if mimicking increases the likability of people in a social interaction and therefore can make each other more accepting of their individualistic ideas and opinions.  It was reported in Psychnet in full HERE, but the summary is fascinating:

Their first experiment consisted of 78 subjects who were asked to interact/speak with an experimenter. During their talk, some researchers were instructed to touch their face and wiggle their feet more than others.

The results for the first experiment found that in the first study, the rate of face touching increased by 20% and foot wiggling by 50% when subjects were being mimicked by strangers.

For the second experiment, mirroring increase likability, as the subjects who were mimicked rated their experimenters at an average of 6.62 and opposed to a 5.91 when they were not mimicked.

The third experiment consisted of 55 subjects where all were asked to take a questionnaire to assess perspective and empathy. Whilst taking the questionnaire, experimenters mimicked the mannerisms of the subject, in the same way they did in the previous experiments, foot wiggling, face touching, etc.

The third experiment found that people who were more open to ideas mimicked face rubbing more by 30% and foot wiggling by 50% compared to the control group.

If we are as mirrored and as we are adept in mirroring others, as connected and as linked as we are willing… and as influential as we are open-minded… well, that all makes a great case for living with more clear space and arms wide open to more and more love!

Enjoy deeply connecting & amplifying the love around you…!!!

And, if you want to dive in to your own personalized feng shui in a modern, practical way, Say hello to Feng Shui 101.  Its the guide I made for you to create your own personalized feng shui at home, in the office, wherever you may be… in 8 weeks.  It’s not filled with strict rules or what you “must” do.  Its filled with information, questions, exercises and even videos and classes to help you confidently create amazing spaces with killer feng shui and live with more flow.   Learn more about the 8-week feng shui adventure & get started HERE!