An Ancient Vinegar Recipe To Clear All Kinds Of Negative Energy! 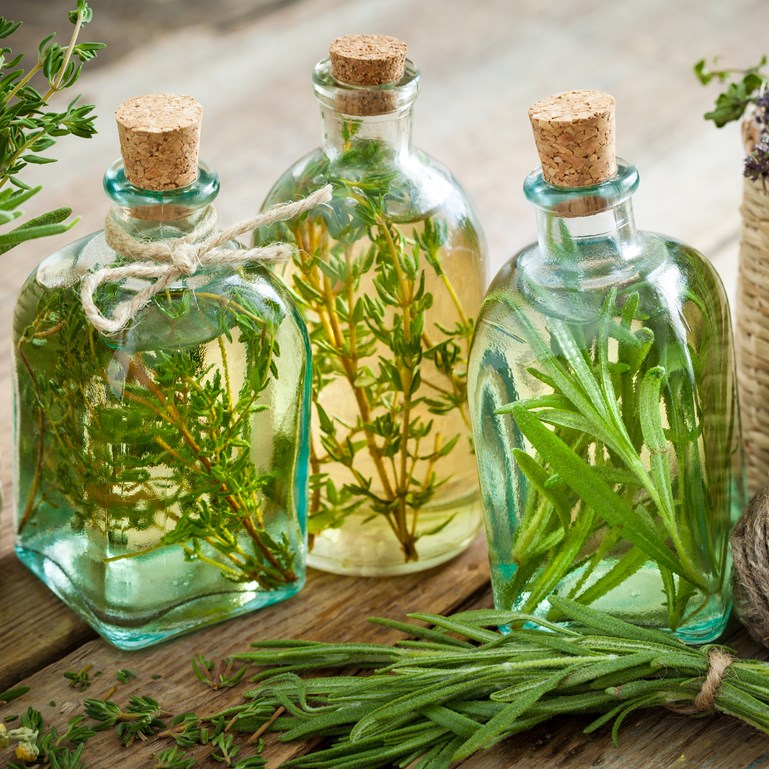 There are so many ancient potions, floor washes and herbal essences thought to clear away negative energies, protect homes and even ward off spirits!

To know me is to know that I love plain white vinegar and water for cleaning many things, namely windows and mirrors and some hardwood floors, and white vinegar has some pretty potent energy clearing properties in itself!

That said, there is a vinegar that has been thought to cure disease (I make no claims here but it’s the lore behind the mixture!) and cleanse energy on a higher level. It’s known as Four Thieves vinegar and it’s a fun potion to make that’s sometimes used in recipes, taken for colds and often used for housecleaning and energy clearing, too!

There are many versions of the legend of the four thieves, each with its own twist, and regardless of the story that you read, they all  have the same outcome –four men  averted a deadly plague with impossible odds of survival before them using an herbal vinegar.

According to one of these legends, there were four thieves who were robbing families that were sick and dying during the Bubonic plague in France  in 1772.  One of these men was an herbalist, who created a medicated vinegar that they used topically, (behind their ears, on their hand and temples) to prevent them from becoming ill themselves.  Eventually these men were caught and when brought to trial, they were asked to share their recipe for the tonic that protected them from the plague.   In exchange they would receive leniency by the court system – although some legends say they were released.   The recipe that they shared soon came to be known as Marseilles Vinegar and Four Thieves Vinegar.

In Gattefosse’s Aromatherapy, he says that the below Four Thieves recipe was hung in the Museum of Paris in 1937:

“Take three pints of strong white wine vinegar, add a handful of each of wormwood, meadowsweet, wild marjoram and sage, fifty cloves, two ounces of campanula roots, two ounces of angelic, rosemary and horehound and three large measures of camphor Place the mixture in a container for fifteen days, strain and express then bottle. Use by rubbing it on the hands, ears and temples from time to time when approaching a plague victim.”

Over time, recipes for this magical elixir have changed, but the most common herbs used in Four Thieves Vinegar today are: rosemary, mint, thyme and sage.

Here is the recipe from my favorite online herb supplier, Mountain Rose Herbs.

Here is a more comprehensive one using lots of fresh herbs:

There are so many uses for this mixture, no matter which version you choose. You can also google Four Thieves Vinegar and find many pre-made for sale, though I’ve not bought one this way and can’t recommend one specifically!

As An Energy Clearing and Cleaning Disinfectant:

You can also this as a powerful disinfectant.   Pour the vinegar in a spray bottle, diluted with water in a 1:1 ratio, and spray in the air or on surfaces to clean. People use this in room sprays and floor washes to keep negative energies out of a house.  If you’ve been through a challenging time, this might be one to try!

To Ward Off Insects:

I prefer using Lemon Eucalyptus essential oil or Rose Geranium as a bug repellant when in the forest or when bugs are biting, so this one is not my first choice, though it can be done! Pour ¼ of a cup of the vinegar in an 8 ounce spray bottle and fill the rest with water.  You can spray this directly on your skin as a natural insect repellant.

Of course, you can clean with standard white vinegar and get great results, but the history behind this vinegar is so rich and potent, I had to share it!

The idea of keeping the energy high and clear around you is a big one: it will keep you feeling brighter, stronger and more powerfully magnetic. In any and all ways you keep your home’s energy high and bright it will serve you and support you in creating an abundant life!